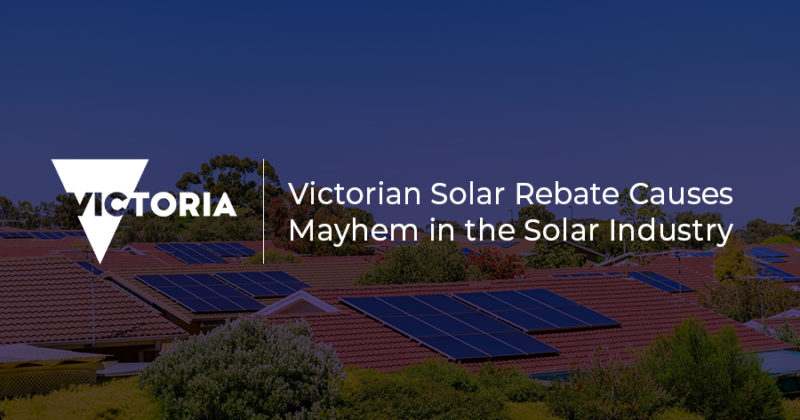 The Victorian Labor Government announced in August last year a $1.3 billion “Solar Homes” package to assist homeowners in installing solar PV systems. The scheme will be offered to 770,000 Victorian households for the next 10 years and is in addition to the Federal STC ‘rebate’.

Households with a combined income of less than $180,000, living in a home worth under $3 million are eligible for the scheme, which offers an extra rebate of up to $2,225 for a solar PV system. This covers 90% of Victorian homeowners.

Originally the scheme was to provide 24,000 rebates for the remaining financial year 2018-19, however due to high demand, this was increased to 32,000 before the scheme was put on hold for a month in April.

Rebates have now been capped at just 3,333 per month across the state. After being suspended for a month, the rebate was made available again on July 1st, however the allocated rebates were all gone within a matter of days.

Now Victorians will have to wait until August 1st for applications to reopen. However, there is already up to 10,000 quotes backed up in the system awaiting processing, meaning it could be 3 months before any new spaces become available.

Of course, residents aren’t willing to pay full price for a system when an additional rebate of $2,225 is being offered, causing most people to post-pone purchasing a system until a rebate opening becomes available. Unfortunately, this pattern of behaviour is causing mass instability in the solar industry, with many companies having to let staff go and shut their doors as they struggle with the on-off sales.

Essentially, solar providers are only making sales for a few days a month now. This sudden reduction in income means that businesses are now making only 10% of the sales they previously made.

The closing down of solar companies will also impact households and businesses who already have solar installed. If a system has issues and needs to be repaired or replaced under warranty, there is not a lot they can do if the provider they purchased their system through is no longer in business.

According to those who have already applied for the rebate, the application process is more complex than applying for a mortgage. Applicants must undergo an intensive identification process, including facial recognition software, to be eligible to apply.

Several industry bodies are calling for a reassessment of the scheme, encouraging the Labor Government to amend the offering. Smart Energy Council CEO, John Grimes, says the program has failed, “People are really struggling. They’ve gone from having growing businesses with a strong pipeline of installations, to basically nothing. Now, local businesses are being forced to fire staff, and incur huge losses, and it’s causing great distress.” He also commented on the impact this has had on residents, “Right now, Victorians are struggling with high power bills. The solar homes program offered a chance for people to reduce their bills, but now, it’s offering nothing but false hope.”

The Smart Energy Council is hosting the Victorian Solar Rally on Thursday 25th July at Parliament House to push for change. Those in the industry are calling for the maximum household income to reduce from $180,000 to $90,000 and for the allocated number of rebates available per month to increase.