The Difference Between Power Optimisers and Micro-Inverters | Infinite Energy

The Difference Between Power Optimisers and Micro-Inverters

The Difference Between Power Optimisers and Micro-Inverters 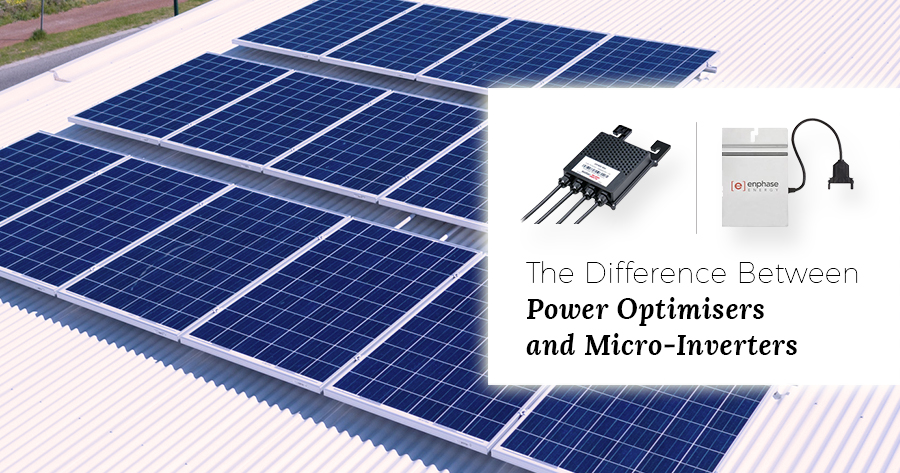 
In traditional solar PV systems, the DC power your panels generate is transmitted to a single string solar inverter. This converts the DC power to AC power, which is then used by appliances in your home or exported to the grid. Fronius Symo and SMA Sunny Boy are examples of traditional string inverters.

Instead of one central inverter, solar PV systems with micro inverters feature an inverter on the back of every panel. These micro-inverters perform the same function as a standard string inverter (conversion of DC power to AC power), negating the need for a standard inverter. Enphase is a common micro-inverter choice in Australia.

Because the DC-AC conversion of micro-inverter systems takes place at the panel level, the output of each module is not affected by other modules. Micro-inverters also allow you to monitor the performance of individual solar panels.

Micro-inverters can be anywhere from double to three times the cost of standard string inverters, while not matching the same efficiency levels.

Because they sit on your roof with the panels, micro-inverters are more susceptible to extreme weather conditions.

Most micro-inverters are only rated to 65°C degrees, and with the temperatures on roofs in most parts of Australia (under a solar panel) getting a lot hotter than 65°C degrees in summer, your micro-inverters will be put under an incredible amount of stress, and may not function as designed.

While micro-inverters can increase the output of traditional systems with a string inverter by 6-8%, we don’t think they’re worth the hefty price increase, and potential unreliability in the harsh Australian climate.

Power optimisers can be inbuilt in the panels themselves, like Canadian Solar’s new Smart Module, or sold and fitted on separately, like SolarEdge’s power optimiser.

Instead of converting DC power to AC power at the panel site like a micro-inverter, power optimisers condition DC power and send it to a string inverter. This approach results in higher system efficiency than a string inverter alone.

Less expensive than micro-inverters, high performance power optimisers like those from Solar Edge achieve all the same benefits at higher efficiency and with higher reliability.

While they cost less than micro-inverters, investing in power optimisers will cost more than purchasing standard panels and a string inverter.

Power optimisers are a great option where shading or a complicated roof would negatively impact the performance of your solar system. However, if you’re lucky enough to have an uncomplicated, unshaded roof, a string inverter by itself is still a great option.

For more information on solar for your home, including power optimisers, give us a call on 1300 074 669, or simply request a no obligation call back by clicking here.