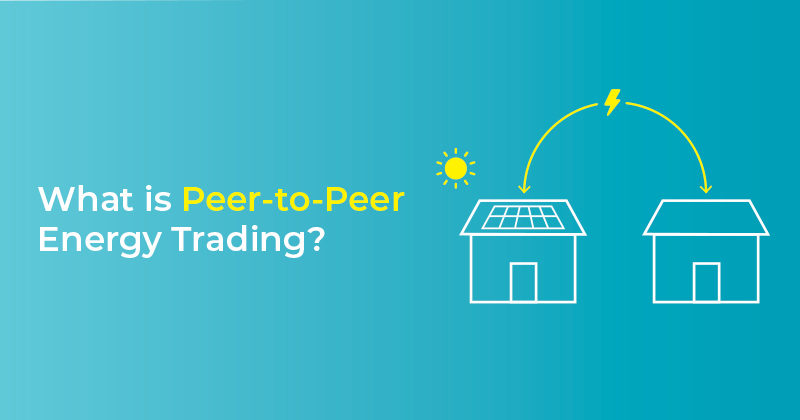 Peer-to-peer energy (P2P) trading is the buying and selling of energy between two or more grid-connected parties. Often in the form of solar energy, any excess energy can be transferred and sold to other users via a secure platform. Peer-to-peer energy trading allows consumers the choice to decide on whom they purchase electricity from, and who they sell it to.

Currently, excess solar energy is exported back to the grid for a small feed-in tariff rate. However, this method is becoming obsolete as more people are looking for flexibility and control in managing how their resources are distributed.

The trading of energy is done through a secure platform, often using a technology like blockchain. Blockchain is a database technology that processes and stores information, such as transactions of assets. These assets can be in the form of renewable energy credits, which can be traded through the database. Peer-to-peer energy trading platforms such as blockchain will allow consumers to share their excess energy amongst one another and control how it’s distributed through microgrids. Users who both sell and consume energy are called ‘prosumers’. Even if you don’t have solar panels, you can still purchase energy from others.

What are the benefits of P2P energy trading?

The potential for these innovative technologies has several benefits including:

Where is P2P energy trading available at the moment?

The first recorded peer-to-peer energy trade occurred in Brooklyn, New York, in 2016 when a resident with solar panels sold a few kilowatt hours to his neighbour via the Ethereum blockchain.

Since then, the idea has circulated the globe. While integration has been slow, mostly due to the current market, there have been several residential trials taking place in Australia and other parts of the world.

Here are just a few of the companies breaking ground in the peer-to-peer trade across the globe:

LO3 is revolutionising the way energy is shared and distributed. Using a platform called Exergy, households and businesses trade electricity on an auction market. Following a huge success in New York with the Brooklyn Microgrid, LO3 is now working on a closed-market project in South Australia, partnering with Yates Electrical Service.

SonnenCommunity is an exclusive group made up of sonnenBatterie customers. Acting similar to a P2P trading platform, sonnenCommunity members are able share their excess solar energy to others through a program called sonnenFlat.

SonnenFlat customers must have a solar PV system of at least 5kW and a sonnenBatterie eco 8.8 or above to participate. The benefit of sonnenFlat means users can avoid unexpected price hikes and increased rates, and instead just pay a flat fee, with any excess energy charged accordingly.

Power Ledger is an Australian technology company that has developed a blockchain-enabled peer-to-peer renewable energy trading platform. The platform facilitates the buying and selling of renewable-generated electricity in real time, enabling users with solar panels to trade their excess solar energy with their neighbours. The company has already formed partnerships with energy retailers, industry bodies and local governments to deploy the technology and currently has 22 projects across eight countries including Australia, the United States, Italy and Thailand.
Power Ledger’s technology won Sir Richard Branson’s global Extreme Tech Challenge award in 2018.

Just like many peer-to-peer energy trading start-ups, Grid+ secured its capital through crowdfunding, raising $29 million before going live. The company, which operates in Texas, is hoping to pull in 100 million customers by the end of 2019.

Grid+ is owned by New York company, ConsenSys, which uses blockchain technology to create applications in many different fields.

Suncontract launched the world’s first trading platform on April 13th, 2018 in Slovenia. The company has partnered with European nations and many energy sectors and blockchain partnerships to provide an energy trading platform to households. Via an app, users can enter into deals with each other, set prices and share energy amongst one another. While the project is currently being implemented in Slovenia, it will shortly begin in the European Union where they have received support from the government and reputable EU commissioners.

A partnership between Bax Company, Belgian tech provider Enervalis and Eemnes Energie has created the largest-scale peer-to-peer energy trading platform in Europe. The pilot project is based in the Netherlands, and will allow 4,000 participants the opportunity to sell and trade their renewable energy for the next 10 years. The companies are working together with the municipality of Eemnes, housing corporation De Alliantie, Chalmers University in Gothenburg (Sweden), the province of Utrecht, the Dutch Government and the European Union to establish and oversee the pilot.


While peer-to-peer energy trading may not be at the stage of mass integration just yet, the idea is quickly being adopted as a solution for the future. By revolutionising this technology, consumers won’t need to rely on utility retailers for their energy, and can make smart, sustainable choices about how they use and distribute energy.