Solar Energy: Is It a Solution for Climate Change? | Infinite Energy 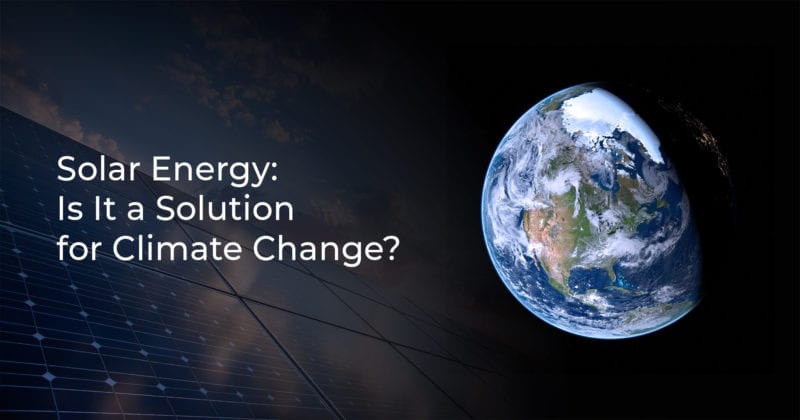 We all know that global temperatures are rising. Despite that however, things still seem to be moving at a gradual pace. According to the Intergovernmental Panel on Climate Change (IPCC), in 2018 we still had until 2030 to cut our carbon emissions by 45% and keep global temperatures from rising above 1.5°C.

However, plans may have to change, and we need to move. Fast.

Hans Joachim Schellnhuber, founder and director emeritus of the Potsdam Climate Institute stated in 2017 that the planet may be “fatally wounded by negligence” until 2020.  Recently, climate scientists have backed the claim. The 12 years we were given to keep the global heating crisis from getting any worse has been reduced to just 17 months. The deadline in reducing our carbon emissions is now the end of 2020, and if we cannot accomplish anything significant by that time, the earth’s levels of survivability will decrease considerably.

As if the 2020 deadline to reduce carbon emissions isn’t enough to spark immediate action, National Geographic reports that carbon dioxide levels are now at a record high. Carbon dioxide is one of many greenhouse gases which are intended to keep the Earth’s climate livable. However, greenhouse gases have been out of balance for some time now and could change the rates of survival on the planet.

Carbon dioxide is the most hazardous and predominant greenhouse gas on Earth. In May earlier this year, CO2 levels peaked to a record high of 414.8 ppm (parts per million), according to the Scripps Institution of Oceanography in California. The increase of CO2 emissions is primarily because of human activities – such as burning fossil fuels.

Because carbon levels are out of balance, the Earth’s weather and climate systems are experiencing shifts, commonly referred to as climate change. Climate change not only includes the rising average temperatures which need to be addressed, but a whole set of other environmental impacts such as the conditions of wildlife population and extreme weather occurrences.


What Are We Doing So Far?

On September 23rd, the UN will be holding a special climate summit in New York. This summit however, as stated by UN Secretary General Antonio Guterres, must be attended by countries who have concrete plans to improve their national carbon cutting plans. This will be followed by the UN Climate Change Conference, or the COP25 in Chile, in December. By the end of 2020, the COP26 will be held in the UK to further challenge nations to fight climate change.

In Australia, the government has implemented a Renewable Energy Target scheduled to be completely fulfilled by 2020 as a national effort against climate change, with solar energy being one of the key drivers. Aside from having over two million households using solar energy to generate electricity, investments are continuously being entrusted in the nation’s solar industry.

Just recently, after the approval of four large solar power stations towards the end of August, Australia has already met its target for 2017 to 2019. Clean Energy Regulator Chair David Parker has confirmed the milestone and has stated that Australia will generate enough renewable energy to meet and even exceed the 2020 Renewable Energy Target.

The benefits of using solar energy have been campaigned repeatedly for a long time, and with a purpose. Utilising it to generate power can greatly reduce the emissions of CO2 by decreasing the demand for fossil fuels. This will minimise greenhouse gas emissions and can reduce our carbon footprint. For example, an Australian household with a system size of 6.6kW would generate 11,046kWh of clean energy each year, and reduce 9.5 tonnes of harmful CO2 emissions from being emitted; the equivalent of planting 35 trees.


Other Ways to Reduce Your Carbon Footprint

In more ways than one, all of us can help in reducing our carbon emissions to ensure the sustainability of the planet. Change must start with ourselves. While the government and global organisations are taking bigger steps to save the climate, even adopting small, daily habits at home can make a big difference.

One of the simplest ways we can cut carbon emissions is through living by the 3Rs – reduce, reuse and recycle. Proper waste management can make a big difference and recycling non-biodegradable materials instead of throwing them away (such as plastics), can help reduce our impact on the planet. Another way we can help in reducing carbon levels is by using public transport instead of cars, or at least minimising the use of cars. In a 2017 study from Lund University published in a journal called Environmental Research Letters, living car-free can save about 2.4 tonnes of CO2 per year, per person.

But if going the extra mile is an option, adopting the use of renewable energy, specifically solar energy can be a big help in cutting our carbon footprint. Burning fossil fuels is named as one of the major sources of carbon emissions, so there has been no better time to consider the use of solar energy for homes.

If you would like solar for your home or business, contact us today and one of our energy consultants can arrange a quote for you. After all, we can all do our part for the environment.