Updates on the Victorian Solar Rebate

Updates on the Victorian Solar Rebate 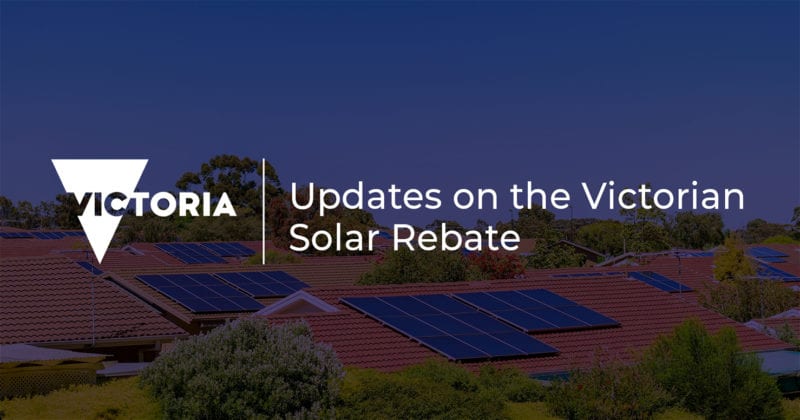 In August last year, the Labor Government in Victoria launched a $1.3 billion solar rebate package that will be of assistance to households who wish to have their own solar PV systems installed. Those with a combined income of less than $180,000 and living in a home worth $3 million or under are qualified for the program and will be able to receive an extra rebate of up to $2,225.

However, what was originally supposed to provide rebates for 24,000 for 2018-19 blew up to 32,000 because of high demand volume and was put on hold for April. Although applications opened again on July 1st, over 3,000 rebates were already gone in just three days. The system opened again on August 1st but with some 10,000 quotes already backed up for processing. As a result, Victorians are postponing buying a full-price system in the hope of securing a rebate slot and thus causing mayhem for solar providers who are struggling to keep their doors open every other day of the month.

With workers losing their jobs and businesses closing, the solar industry was not prepared to take this sitting down. On the 25th of July, Victorian opposition leader Michael O’Brien spoke to a crowd of over 300 solar retailers and installers during the Victorian Solar Rally, stating that the government had got it wrong, and now a policy that was meant to develop solar would pave the way to “killing solar in Victoria” instead.

Organised by the Smart Energy Council, the rally was aimed to voice the struggles that solar installers were facing because of the failed Victorian solar rebate scheme. Installations have dramatically decreased since the policy’s implementation, significantly affecting the solar industry in the state. The council’s chief executive John Grimes, called it a “catastrophe” and further added that he knew of several solar businesses that had gone into liquidation in the past weeks, with one laying off 60 employees because of the policy.


Of Unicorns and Solar Rebates

According to Grimes, one is more likely to encounter a unicorn in Victoria today than someone who has successfully secured a solar rebate.

Solar veteran Finn Peacock of SolarQuotes pointed out that the scheme was the worst that he had seen in the industry. During the rally, he had said that businesses he had spoken to will have to shut down if August 1st would render a similar situation from July 1st.

Elias Ellis, director of ECG Electrical Victoria, had done 30 installations in April, and a handful in July. He described August to be “lucky” if he was able to do a handful more than that. By June, he said that they were already struggling on keeping their staff. “I’m hemorrhaging money,” Ellis said, and added that he would soon have to close business because the program was a “screw-up.”

The current situation was a race to the bottom, as National Electrical and Communications Association Head, Pawel Podolski put it. This has especially impacted the experienced small businesses in the solar industry, who now worry for the jobs they wish to keep and to continue delivering high-quality services to their customers. Podolski said that this can’t go on.

However, Energy Minister Lily D’ Ambrosio said there were “no apologies” – not especially since this program has made solar energy cheaper and much more accessible for families. She said that this was a significant change on how the solar industry operates and that huge demands for the rebates were expected. Ambrosio further added that they were working with the sector to help them adapt.

Solar Victoria also said that a balance in the system should come around in the coming months as it is still relatively new, and it would take a while for the industry to adapt to it. Solar Victoria CEO, Stan Krpan, had also clarified that it had never intended to effectively subsidise 100% of the market and were only aiming towards a portion who meet the income threshold for the program. While the Smart Energy Council had called to lower the income threshold of $180,000 to $100,000, Krpan had argued that a majority of those who had access to the rebates were already earning less than $100,000 a year.

Solar Victoria resumed the application for slots for their solar rebates scheme on August 1st. But with 10,000 quotes already pending for processing in their system, things were not easier. After opening at 9 AM, the 3,767 August allocations of the rebates were gone in less than 90 minutes.

Victorians would now have to wait until September 2nd for a chance at getting their rebates from Solar Victoria.


A Win for the Solar Industry

Fortunately, the appeals from the solar industry have been heard by Solar Victoria, who on the morning of August 28th, announced the program will release 6,500 rebates on September 2 (next Monday) and a further 3,250 rebates two weeks later, for a total of 9,750 rebates across the month (two and a half times that of August).

Further changes to the program include:

The announcement is a promising step forward for the industry and should begin to alleviate some of the many negative blows that have been dealt to those involved.