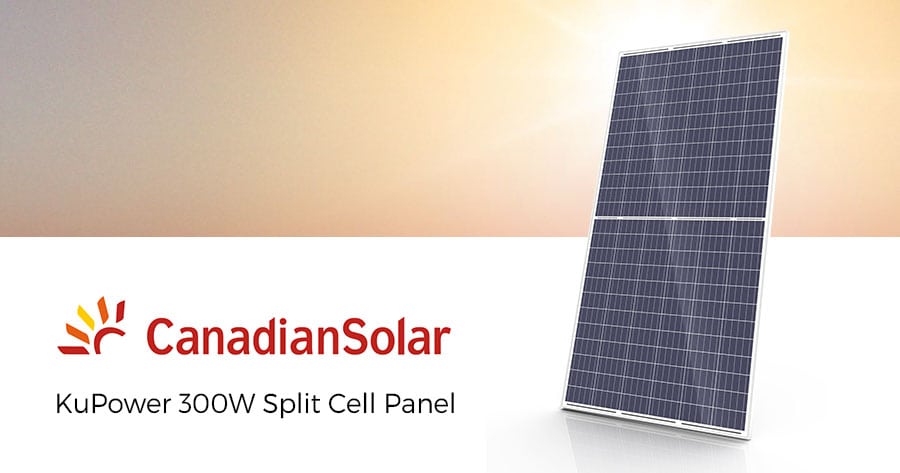 Having shipped more than 22GW worth of solar modules since 2001, Canadian Solar are one of the top three largest solar companies in the world.

Canadian Solar employs over 8,900 people across 24 countries, and with state-of-the-art manufacturing facilities in Canada, China and Vietnam, Canadian Solar is one of the most bankable solar companies worldwide.

Their new panel, the KuPower 300W Split Cell Panel, is an exciting addition to our product line-up, which includes SunPower and WINAICO panels.


Canadian Solar’s new KuPower panel utilises split cell technology, meaning that the individual cells that make up the module are half the size of normal cells found on standard panels.

As a standard, the average temperature coefficient of both poly and monocrystalline panels sits at around 0.5%/degC. This means a solar panel will lose 0.5% percent of its power for every degree the temperature rises.

Beating the industry standard with 0.39%/degC, the KuPower module loses just 0.39% percent of its power for every degree the temperature rises, increasing power output by 0.8%.


KuPower panels are designed with Passivated Emitter and Rear Cell (PERC) technology, which allows electrons to flow more freely and increases the reflectiveness of the back of solar cells.

Due to PERC technology, KuPower panels perform batter in shaded areas than competing panels. In fact, if a KuPower panel is exposed to up to 50% shading, they will maintain 50% power output, while a conventional panel would have 0% output.

Unavoidable shading on your solar PV system can have significant impact on production. By choosing a panel that utilises PERC technology like Canadian Solar’s KuPower module, you’re effectively safeguarding your investment.


Thanks to split cell technology, dual cell damage impact area in KuPower panels is reduced by up to 50%, meaning KuPower modules have a 50% lower micro-crack risk than competing panels.

Due to shorter cell lengths, the thermo-mechanical stress on interconnects and cell soldering joints have also decreased by 50%, marking a significant improvement in failure redundancy.


Like all Canadian Solar panels, the KuPower 300W Split Cell Module is covered by a 25-year linear power output warranty, and a 12-year product warranty on materials and workmanship.

The latest in photovoltaic technology, Canadian Solar’s KuPower 300W Split Cell Panel is an ideal choice for solar installations in Australia thanks to its impressive performance in both warm weather and shade, plus increased power output.