What is the Difference Between Solar Panels and Photovoltaic Cells?

What is the Difference Between Solar Panels and Photovoltaic Cells? 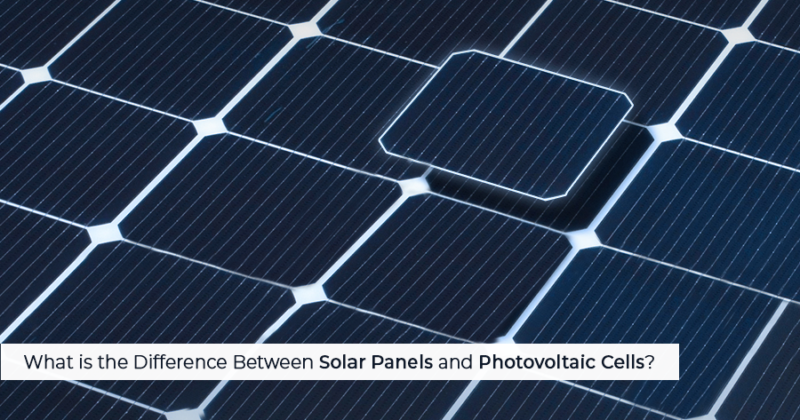 The Role of Photovoltaic Cells


To begin, we’ll first examine the role of photovoltaic cells in your solar PV system. Your solar cells produce electricity via the photovoltaic effect, where sunlight creates electricity in certain materials by knocking their outer electrons loose.

Without getting too technical, photovoltaic cells can be made from either monocrystalline or polycrystalline material, and consist of several layers, the most important of which are the two semiconductors in the centre. The top semiconductor is a negative layer, as the material’s atoms contain extra electrons, which carry a negative charge. In contrast, the bottom semiconductor is a positive layer, as the material’s atoms have missing electrons.

When sunlight hits the top semiconductor, the loose electrons become excited, are knocked loose, and then attracted to the positive layer beneath. A barrier between the two layers is formed, as conductors on both layers force the electrons to travel around the cell, creating an electric current.

The conductors then force this current out of the cell and into an electrical load, which captures the energy your photovoltaic cell has produced. The electrons eventually re-enter the cell, and the process repeats.

The Role of Solar Panels

In addition, by sealing multiple cells together, your panel acts as a protective case for the cells to exist in. This means your solar cells are less susceptible to damage by external factors, including severe weather such as hail*.

The DC electricity generated by your solar panels is then directed to your central inverter (or micro inverter, depending on your system set up), where it is converted into AC electricity your home and appliances can use.

The number of cells in your panel will depend on the specific brand and size you choose, although 60 and 72 cells in a single panel are common.

Another term you may have come across, a photovoltaic array, is simply used to describe a system that is composed of multiple PV panels.

The Photovoltaic System as a Whole

While a single photovoltaic cell is able to convert sunlight into electricity on its own, the panel is essential to combine and direct the energy output of numerous cells to your inverter and home.

For more information on quality solar panels, or for a customised solar quote for your home, contact us on 1300 074 669, or click here to request a no obligation callback.

*This is one of the many reasons it’s so important to invest in a good quality solar panel. If substandard plastic is used, or if the manufacturing process is done by poor quality machines or by hand, a process called delamination can occur. This means the bond between the plastic and glass detaches, allowing moisture and air to enter the panel, causing corrosion and inevitably, complete failure.