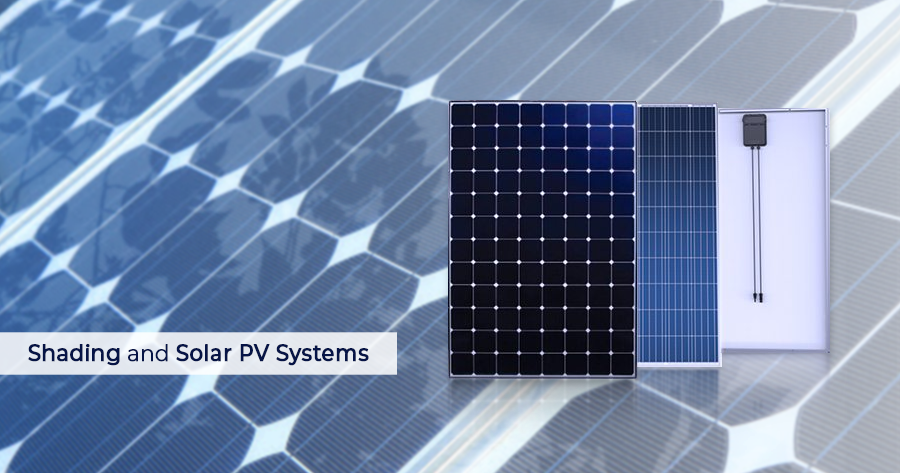 
Solar cells produce electricity via the photovoltaic effect, where sunlight creates electricity in certain materials by knocking their outer electrons loose. Therefore, it makes sense that when a shadow is cast on a panel, whether by a tree or another building, it will decrease the amount of electricity produced by the panel.

Unfortunately, this power output loss is not proportional to the area that is shaded. It’s estimated that shading of just one cell in a module (which typically consists of around 60 cells) can reduce power output by as much as 33%.

To understand why such little shading can result in such a significant loss of output, it’s helpful to use the analogy of water flowing in pipes, which you may have already come across. Just like the rate of flow in a pipe is constant, the current through a string of solar cells is constant for a given irradiance level. 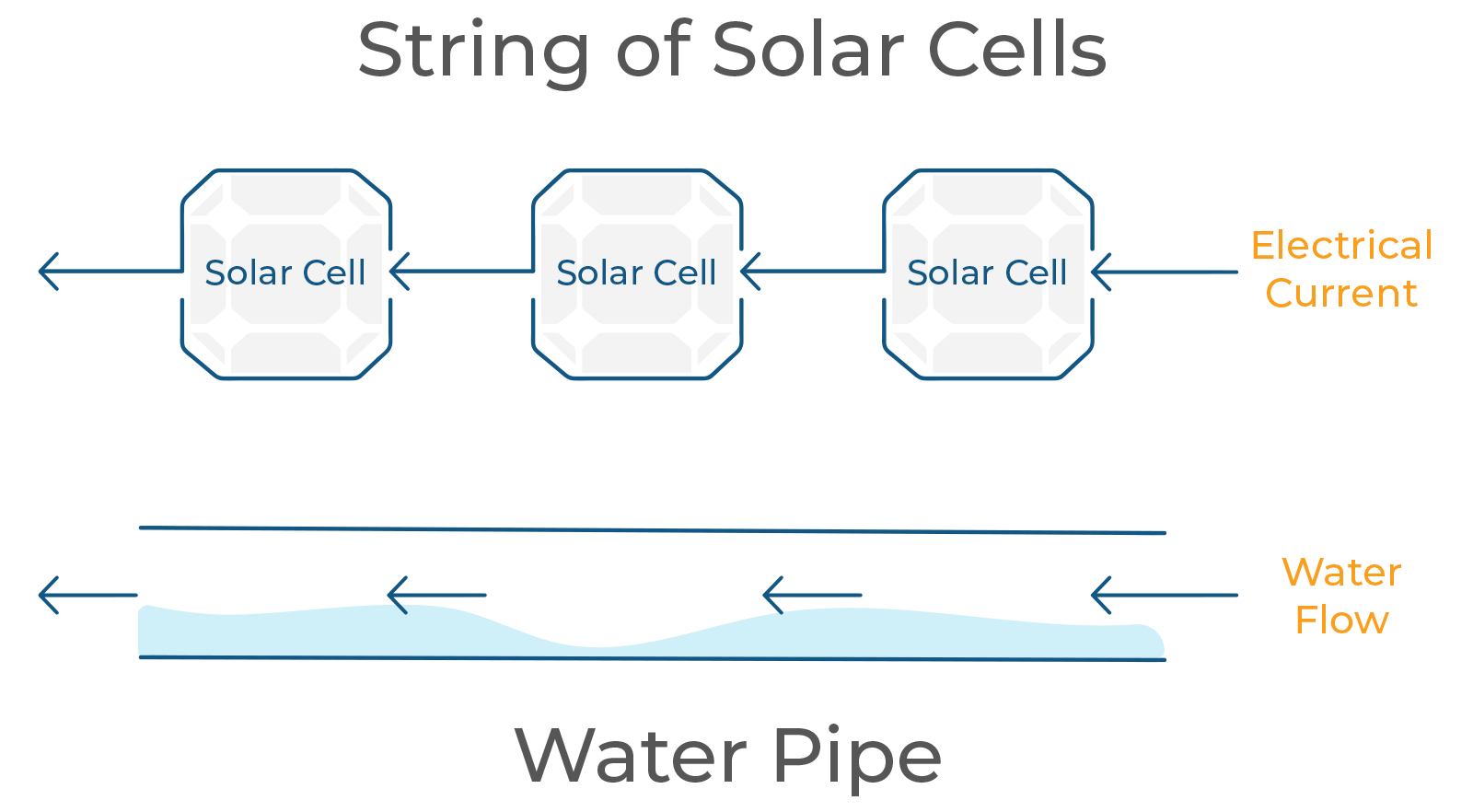 For our purposes, a clog in a water pipe is like shade on a solar cell. Just like a clog restricts water flow, shading will reduce the flow of current through the entire string. The reason this is so significant is due to every cell in a string only being able to operate at the current set by the lowest-performing cell, which in this case, would be the shaded cell. 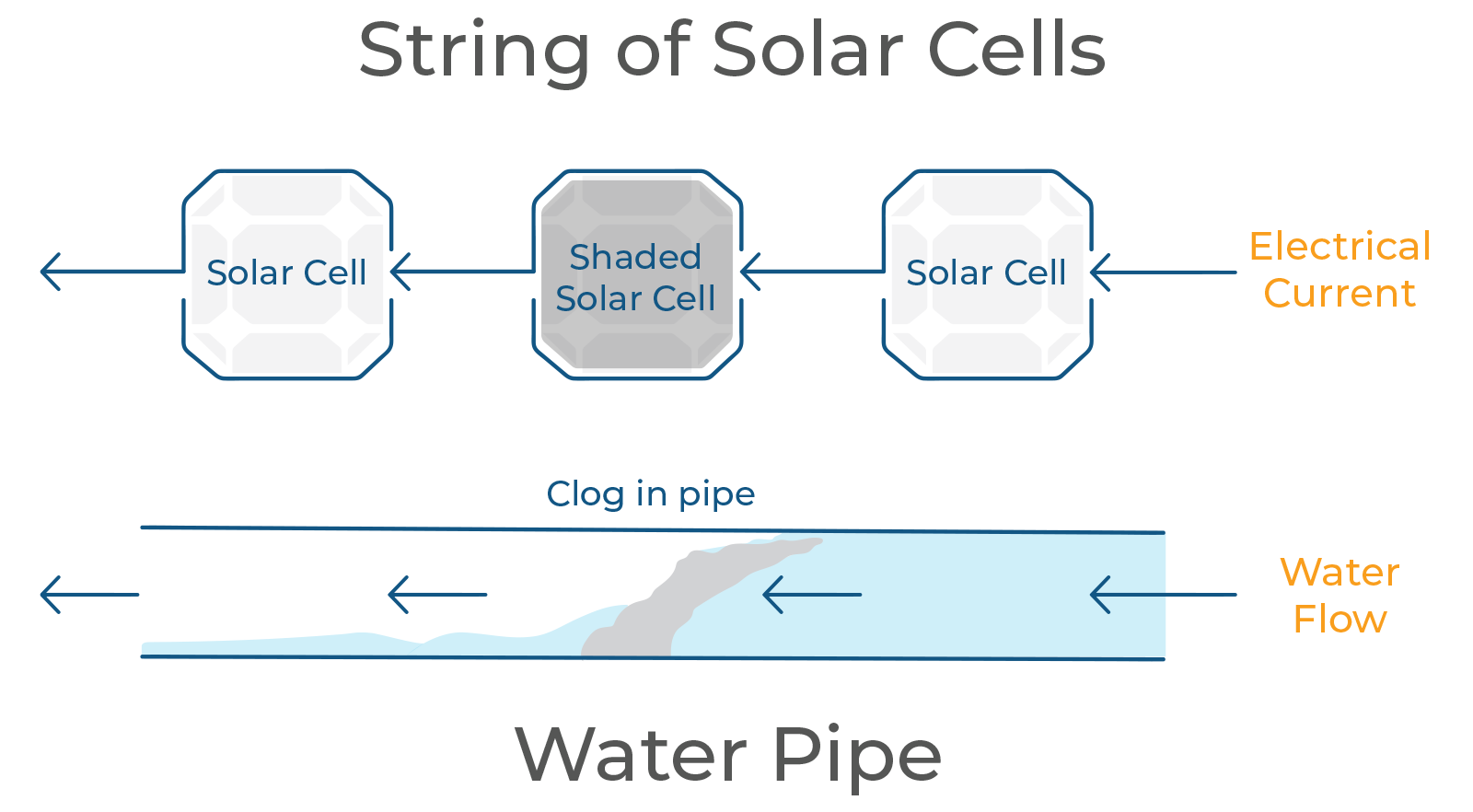 This effect is compounded as panels in a traditional array can only perform as well as the lowest-performing panel. Therefore, even if only one panel is shaded, every panel in your system suffers. This means that only a tiny amount of shading can drastically reduce the output of an entire PV system.

In the past, this made solar a no go for homes or businesses with shading issues. Thanks to advances in technology, however, there are now multiple ways to avoid losses due to shading in your solar PV system.

Because this conversion takes place at the panel level, the output of each module is not affected by other modules. This means partial shading of a panel will not affect the output of an entire system, making them a great choice for buildings with unavoidable shade.

Effectively optimising the power output at the module-level, power optimisers eliminate power mismatch between modules and decrease shading losses.  Plus, instead of converting DC power to AC power at the panel site like a micro-inverter, power optimisers condition DC power and send it to a string inverter.

Less expensive than micro-inverters, high performance power optimisers achieve all the same benefits at higher efficiency and with higher reliability.

Power optimisers can be inbuilt in the panels themselves or sold and fitted on separately, like SolarEdge’s power optimiser.


Thanks to the unique parallel circuitry design found in SunPower panels, shading loss is limited to just the shaded area. Patented Maxeon cell technology allows electricity to pass through cells even in shaded situations.

As a result, SunPower panels deliver more energy than conventional panels due to higher performance in row-to-row shading.

While shading used to cause significant problems for solar PV systems, reducing power output by as much as 33%, that’s no longer the case. Updates in technology including micro-inverters, power optimisers and advanced panels like SunPower no longer restrict solar for those with unavoidable shading.

While trimming a few trees will always be the easiest and cheapest option, if shading is not easily fixable, the solutions listed in this blog are all great places to start.

For more information on solar, click here to request a no-obligation callback.