How Australia’s energy technology will change by 2030 | Infinite Energy 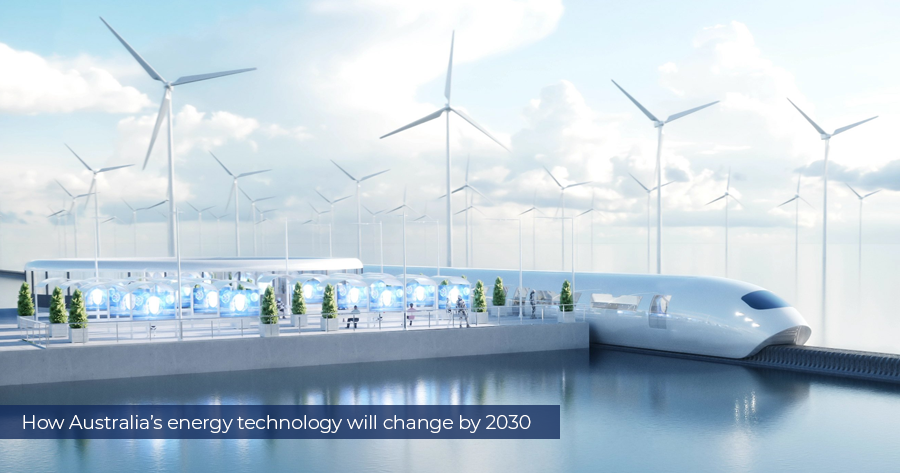 Now that 2020 is (finally) over, we can look to the future and consider what the next decade might bring. New and improved technology is always a given and at Infinite Energy, we are looking forward to seeing what advances in solar and battery storage technology will take place over the next few years.

We have dusted off our crystal ball to make some predictions about what we think the major changes within the solar power industry over the next 10 years will be.

Solar panels will become even more affordable and wide-spread

As of August 31 2020, more than 21% or 2.53 million Australian homes had solar panels and between 2010 and 2019, the amount of global solar capacity rose from 40 GW to 580 GW, according to International Renewable Energy Agency (IRENA) in its report Renewable Power Generation Costs in 2019.

According to the report, during the same period, module prices fell 90% and balance of system (includes all components of a photovoltaic system like switches, mounting system, solar inverters, batteries etc) costs also decreased, if less steeply.

Based on these trends, we could expect to see a further drop in prices as the technology and manufacturing process improves, as well as demand steadily increasing, which will help the products to become more cost-effective through economies of scale.

Battery storage is seen by many to be the ultimate tool for self-consumption and going “off-grid”, though, unfortunately, the cost is currently prohibitive for some.

Investment and innovations from brands like Tesla, Sonnen, LG and SENEC are showing that battery storage is here to stay and is set to get cheaper.

As with solar panels, the longer battery storage solutions are in the market, the higher the demand and competition in the market will be, which will help to drive prices down.

We already know that the demand is there for battery storage, but cost and ROI is a big factor for many of our customers. We predict that within the next 10 years, we will be at a point where the case for domestic and commercial battery storage will make a lot more sense financially.

While electric vehicles (EV) are currently out of reach for many, we predict that they will become much more popular over the next decade. This will be mainly due to external pressures, rather than government initiatives. According to 2019 government analysis, half the new cars sold in Australia in 2035 will be electric vehicles, even if there is no policy support to drive change.

BloombergNEF has predicted how the auto industry will evolve in its latest Long-term Electric Vehicle Outlook report, which says that while EVs currently make up just 3% of global car sales, they predict that EVs will hit 10% of global passenger vehicle sales in 2025, with that percentage increasing to 28% in 2030.

As Australia has no local car industry anymore, we are particularly susceptible to external pressures for car stock, and with many countries around the world committing to phasing out internal combustion engine (ICE) vehicles, Australia car sellers will eventually have to start taking on more electric car stock in order to meet local demand for new cars.

There has also been research conducted that suggests that within the next 10 years, EVs will cost about the same to make as ICE vehicles, which should help to drive the purchase price of EVs down, making them more affordable for the average Australian.

Upgrade of the grid to compensate for renewable energy

Australia’s current electricity grids were established within a very different energy climate. The increased amount of renewable energy generation through solar, wind and hydro is putting additional pressure on the energy grids and are attributing to some of the issues that affect them.

The grids have been designed to accommodate baseload power, predominantly from coal power plants, rather than to incorporate the intermittent energy that comes from renewable sources, particularly the mid-day oversupply of energy from residential solar.

Something has clearly got to give in this situation, and combatting this will take a combination of operational and behavioural improvements.

Recent changes to the Renewable Energy Buyback Scheme (REBS) to the new Distributed Energy Buyback Scheme (DEBS) for new solar PV system in Western Australia is an example of government policy encouraging behavioural change to help stabilise the grid. The change from a flat tariff to a variable tariff depending on the time of day is designed to encourage households to self-consume the power generated by their solar PV system. It aims to direct excess solar PV energy to the electricity network when demand is highest, to help stabilise the electricity network.

Structural improvements to the grid will include repairs and refurbishments to poles, wires and networks and increased investment in battery storage like Adelaide’s Hornsdale Power Reserve.

As mentioned, batteries will play a big part in connecting Australia to a more modern and efficient energy grid in the future and community batteries, in particular, will have a huge effect on the modern energy grid.

Unlike a household battery, community batteries allow solar customers connected to the same local distribution network to share in a larger ‘community’ battery that is owned and maintained by the local electricity distributor.

The benefit of community batteries over individually-owned batteries is that solar customers avoid battery installation and maintenance costs and are able to choose unique storage levels for their individual needs.

Additionally, community batteries help to support our aging electricity grids when they are placed in areas where the network needs upgrading or adjusting to maintain power reliability and quality. In older parts of the network, there might be too much pressure on a transformer to accept the two-way flow of power and community batteries help to solve this problem by soaking up any excess solar power and smooth the flow, improving power reliability and quality to customers.

What to Look Out for at the Beginning of 2021

According to Sunwiz, there are a number of important developments that will happen at the beginning of 2021 that will signal a big shift in the world of renewables, these include:

The CER review of the industry, in particular, is sure to bring some interesting findings and recommendations and depending on the study’s recommendations, short-term demand for solar PVs could increase during if subsidies were proposed by the government to be lowered or eliminated.

No matter what the future of energy might be for Australia, you can be sure that solar power will play a large role.

If you’d like to learn more about how you can invest in a renewable future, contact us today or call our energy consultants on 1300 074 669.