Why Solar Power is an Important Investment for Retirees | Infinite Energy

Why Solar Power is an Important Investment for Retirees

Why Solar Power is an Important Investment for Retirees 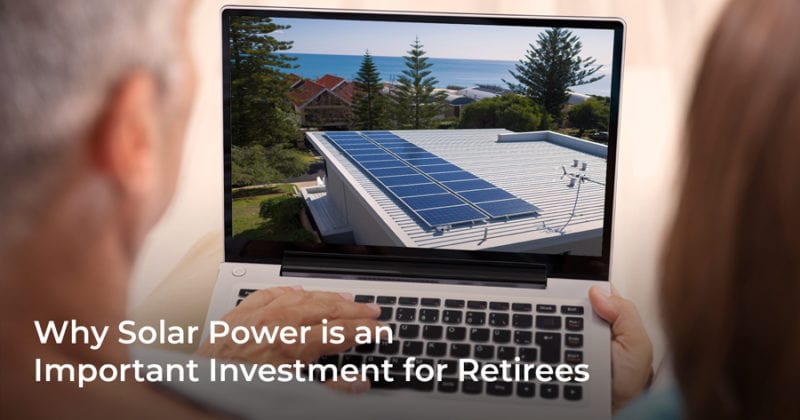 As we get closer to the age of retirement, we begin to think about the many things we’d like to do, and how we will spend our days. Some may wish to spend their retirement engaging in hobbies they've always wanted to pursue but never had the time for. Others may look forward to simply slowing down and spending more time with their families and loved ones at home.

Either way, entering our older years also entails some significant financial adjustments. Having a secure financial future means exploring investment opportunities that can support you upon retirement.

One investment you may want to consider is solar investment. Having a home solar PV system can benefit you more than you may expect. It's one of the low-risk investments that retirees can look into which can provide a return of up to 25% per year.

As they take a more relaxed shift from the daily grind, retirees are likely to spend more of their days at home. Therefore, it’s expected that they will be using more power than they previously were, which can lead to an increase in their electricity bill. During these times, solar is a valuable investment which can be used to support your retirement in several ways.

Being at home for extended periods of time will mean you'll be using your appliances more often. With electricity prices already alarmingly high, it can quickly become very difficult for retirees to cover the cost of their electricity bills with the increase in consumption. Because solar produces energy during the day when the sun is shining, any electricity you consume during the day is most likely going to be covered by your solar system. The more solar you self-consume, the more you can decrease your reliance on the grid and subsequently your electricity bills.

The upfront cost of a solar system may seem daunting to some retirees. For those who are already concerned about covering the cost of their expenses when they retire, having to source the funds to purchase a solar PV system can seem near impossible. However, the benefit retirees have over those who work during the day is that they will be able to maximise their solar self-consumption. Solar self-consumption simply refers to using the solar energy your system produces. The more you self-consume, the less time it will take for your savings to cover the cost of what you paid for your system; also known as your payback period. A shorter payback period means you will pocket the savings your system generates faster, resulting in profit for you. Average payback periods can be from just 2-5 years.

We have seen many of our customers who are on the pension go from having electricity bills of hundreds of dollars reduced to less than $50 since having solar installed.

If you don’t have the ability to buy a system outright, we offer low-interest finance plans through RateSetter. If you choose to finance your system, your savings can quickly cover your weekly repayments.


Many of the energy saving tips that are encouraged by various websites and energy government bodies to reduce electricity costs are all well and good for those who are able to carry them out. However, there are parts of our community, such as the elderly or unwell, who are unable to abide by some of these suggestions. For example, one of the main energy saving tips (for homes without solar) is to encourage people to limit using their largest energy-consuming appliances first, such as their air conditioning to heat or cool down their house. For those who are considered very elderly or have health issues, this is severely detrimental to their wellbeing, and can result in several health issues such as heat stress or frostbite.

Under-consuming electricity because they’re worried about the cost of their electricity bills is a huge issue for many pensioners. Solar provides retirees with the added peace of mind that they can afford to keep the air conditioning on when it’s really hot or use their heating during cold days without worrying about how much it will cost them.

And if you plan to sell your home, having solar panels installed can lead to your property  selling 20% faster. This is because Australians understand the value of solar and the benefits it can bring, with many preferring to buy a home that has solar over those that don’t.

In a survey of 1,000 Australians conducted by Origin Energy in 2018, 77% agree that solar panels can increase property value. 57% said they would be willing to pay $10,000 extra for a home installed with solar panels. And 55% of renters in the survey also said they would pay at least $10 more pet week if they were renting a property with solar power.


The Australian government, in its efforts to put emphasis on the use of renewable energy, provides benefits to households and small businesses that install a small-scale renewable energy system.

Solar systems are among the renewable energy systems eligible for the program. Having solar installed enables the creation of STCs (Small-scale Technology Certificates), which can be used to reduce the upfront cost of your solar system.

The number of STCs to be created will be based on the amount of renewable electricity that the system produces (or the amount of electricity consumption it cuts) and the climate region where it's installed. More information about the Small-scale Renewable Energy Scheme can be found here.

By installing solar, retirees can significantly reduce their electricity bill and increase the value of their home.

It's never too soon to install a solar system for your home. Now's the time to take advantage of falling solar prices and experience the benefits of solar power well into your retirement years.